In progression two, we delved into gender dynamics and ultimately answered the question: what makes true love work today? Outside of class we watched "Jerry Maguire" and "Crazy,Stupid,Love" and analyzed gender and the roles of the male and female in the relationship. This progression was very relatable because we were able to identify how the media portrays men and women. Lastly, we explored the differences in men and women and if the difference are as vast as we think. 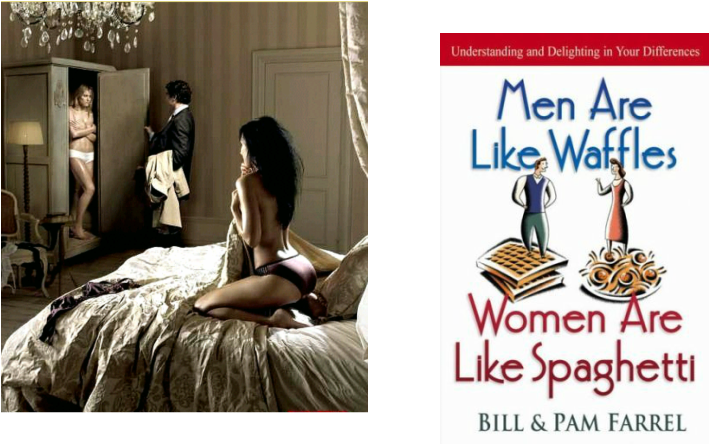 The Ad my group was given to analyze was of a half naked woman on bed and anther women hiding in the closet. There was also a man dressed professionally in the Ad. We were instructed to define which gender was dominant.Was it the male or female that dominated in the Ad ad we came up with a story line that matched the Ad. My group decided that the female was dominant in the Ad because there were two females and only one male so the females had strength in numbers. I personally thought the male is the dominant one in the Ad simply because the women are both half naked,which only suggests sexuality. The female has no power in the Ad.

In this exercise my group and I had to come up with a scene that matches the Ad we were given along with dialogue. In our scene  Bob and Nancy who are married live a typical newly wed life. Nancy is a stay at home wife and Bob is a stock broker. Their house maid is named Ingrid. When Nancy finds out that her husband Bob is having and affair with his assistant Isabelle, she seeks revenge by having an affair with the maid Ingrid,however Bob walks in. This is the point in which the scene is frozen and you have the Ad that we were given.

I chose to respond to "Crazy,Stupid,Love" and define the gender relationships in the film. I came to the conclusion that the film didn't highlight which gender dominated however, the film did present men and women in ways contrary to how society has defined gender roles. The film clearly defines love as something people fight for. I chose this film because it was interesting to me how the men and women in the film were portrayed. It wasn't stereotypical, it was ideal and a lot of people can relate to it.

My second essay focused on women's rights. Specifically, abortion was what I focus on. I chose this topic because I am a strong believer in pro-choice and women should have the right to terminate a pregnancy within boundaries. The government should not have that power over women's bodies. I discussed the downside to making abortion illegal and how it affects women. Women have been fighting for rights and abortion is a personal choice that the State should not take away.